You are here: Home / Public Relations / When Did We Give Up? 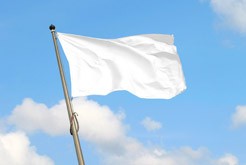 I don’t know when it happened but somewhere in the past several years, we raised the white flag of defeat. Perhaps we were pushed to the edge by too many long hours and too few vacations. Maybe it was the “always on” social media culture that finally taxed our remaining resources. Whatever the cause, we are here standing on the big fact X of apathetic acceptance.

We used to try. We had a fire in our belly that propelled us to not just be good but great. We wanted to create better products and services. We were motivated, delighted even to over deliver on expectations. We aimed high and then aimed higher. Now we’ll throw a song about a giant phallus in an ad…with children! We have automated surveys that no one will bother to follow up on. We throw out 140 character sound bites and don’t bother to listen to what people are really saying. We put cheaper parts in cars just to get them out and deal with the fallout later.

The new definition of customer service is having a warm body (or when you can a robot) man a phone, counter, cash register or table. No personality or empathy required, just show up and pretend to listen.

As a society we are moving through life like war weary drones, who simply strive for “done” rather than “well done.”

Our culture has sunk to a happy level of mediocrity where volume and real time take precedence over innovation and excellence. “Done is better than perfection,” has become the national mantra that seems to excuse us from the real work of prioritizing, cutting back and spending time on the things that deserve the quest for perfection.

With a smartphone in our hand, we have access to a wealth of data, metrics and information. Who needs professionals and their expertise when we can simply get it done, faster and cheaper? Good relationships and quality coverage get dismissed for high volumes of so-so traffic that only look good in a spreadsheet of meaningless numbers. Why pay more for well-written copy by trained communicators who understand your audience when you can get anything for $5 bucks or better yet just buy a book and do it yourself?

I don’t know about you but I want to fly in planes built by engineers and companies that not only want to get it done but rock it out. I want my nieces and nephews to play on playground equipment by people who have a passion for child safety and excellence. And I want to work for companies who don’t only want me to show up but show out and give me the breadth and space to not just get it done but get it well done. How about you?